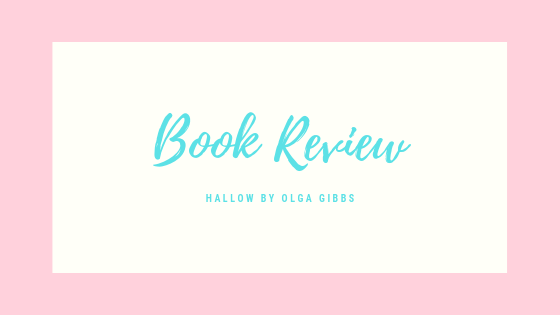 Fantasy has always been my favourite genre to read. Especially YA fantasy.

From Becca Fitzpatrick’s Hush, Hush series to Lauren Kate’s Fallen series, my fantasy of choice would be worlds of angels and demons, of heavenly creatures fighting hellish monsters and the world that’s caught between.

Olga Gibbs’ Hallow encompasses all that I love about fantasy. A wayward angel finding her identity and dealing with the struggles of a world she, until recently, had no idea existed.

Hallow is the second book in the Celestial Creatures series. I admit, I didn’t get round to reading the first one (Heavenward) but when reading this novel, it didn’t matter. It opens with the aftermath of the first book, giving enough information to fill in the necessary blanks. And as the novel goes on, pieces come together to give you all the information you need. You’re never left with questions or gaps in the story.

This is my first ever blog tour, so I thought I’d include the synopsis I was provided with:

“Being one of the most formidable archangels with the power to end the world doesn’t serve you well if you don’t know how to use it.

Thrown into a battle of courts and factions, tangled in a web of intrigues and palatial games, naïve Ariel is surrounded by powerful angels, chasing their own agendas.

There’s no one she can trust. Everyone stands to gain something from her death.

To avoid the bloody battle that Baza brought to her door at Uras, Ariel retreats back to Apkallu (Earth) to find her sister, but the Heavenly battles and intrigues she flees follow her, as Baza’s immense hold on Apkallu forces Ariel and Rafe to make uncomfortable choices.

Ariel’s fight for survival is far from over and it looks like it’s going to be a deadly one.”

Hallow was an interesting read and certainly grabbed my attention.

Ariel’s characterisation perfectly fit with the heroine of the genre – an outcast, “nerdy” type from a broken home who doesn’t want to socialise until she’s thrusted into this new world. But far from cliche, Olga has written Ariel in a way that’s familiar for anyone who reads the genre whilst making her unique.

Throughout the novel, Ariel overcomes obstacle after obstacle, but she’s no Mary Sue. Her characterisation is well-written that her struggles almost drag her down, her flaws are obvious at times, but her strong character overcomes them and she pushes through it all. Olga’s realistic approach to the character allows the reader to fully relate to her whilst showing that even they can overcome their own obstacles, no matter how small in comparison. Despite Ariel’s angelic nature, her character truly humanises her.

As with any fantasy book, the story is fantastical. It creates excitement, especially with the twists at the end, and the romance we are met with at the beginning of the novel (one that developed in its predecessor) doesn’t detract from the overall plot as is common with many YA fantasy novels. Olga certainly gives Ariel her own story without being completely sidetracked by some forced, cliche love story.

There are aspects of the writing I fell in love with. Olga’s descriptions create imagery that cannot be ignored. Beautiful scenes and poetic descriptions makes it a wonderful read.

As with all my reviews, I do have a few points I think could have made the novel a better read:

There were, at times, a few grammatical and spelling errors that detracted from the story. They weren’t constant or plenty, but the novel may have benefitted from a final edit. *I’ve been reassured that the final version of the book will be edited so this should be solved!

I did find some descriptions too long and wordy. The most provoking descriptions of the novel were the shorter ones. Long descriptions, ones that went on for over a few pages, did feel a bit overkill. That’s not to say it created a boring story, but I did find myself wishing it would get to the point a lot faster and I would lose a sense of what was happening.

Although there were a few improvements, the story was a perfect fit for any fantasy lover and I can’t wait to read the first one and get the full story.

Would I recommend this novel?

Heavenward (#1) is being offered for FREE on Amazon right now. Just go here and check it out!

Check out reviews from others on the blog tour:

Connect with the author:

Creative Writing graduate and lover of all things space, dinosaur and food related. When I’m not too busy perusing Twitter and Facebook, or writing the next Harry Potter*, I’m usually reading or catching up on the latest Netflix show. Avid Jurassic Park fan and anything zombie-related, my survival skills are impeccable (at least, I imagine they would be if the end of the world ever came about). Stationery is my weakness and I’m also a huge fan of anything cat, bird or cacti related; you’ll most likely find me sitting on a bench in the city feeding pigeons with the “Do Not Feed The Birds” sign right next to me. *Full disclosure, I’ve never read the Harry Potter series. I know, I’m a terrible bookworm. View All Posts